All That Montage Allows: Spartacus Is Better Than You Think, I Swear

So I finally got around to the season premiere of Spartacus, “Enemies of Rome,” and although I had no fears of the show’s quality dipping, the climax in particular reminded me why I love this series and have vigorously defended it in the past. 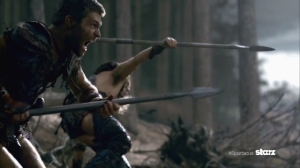 Spartacus loves to use what I call the parallel combat montage as a formal means of creating an emotional crescendo out of very, very hyper-realistic displays of violence. Here, Spartacus barrels through a company of legionaries protecting two Roman generals in one storyline, while new antagonist Marcus Crassus’ final sparring session against a former champion gladiator goes sine missione. Matches on action and the sequence’s rhythmic, pretty even cutting pattern propel the visuals forward together. Both men are victorious over their opponents and are, without any awareness of each other, drawn together in space and time as equals, brother warriors who embrace the higher, personal (which in Spartacus means exposed, godlike abs) “gladiatorial” mode of combat.

I love this. It isn’t like a film placing a slaughtered bull alongside shots of Russian soldiers killing the proletariat and forcing you the viewer to connect the different images through an intellectual process of equating them with the same idea. Spartacus‘ parallel combat montages present the same or very similar action in a sequence that’s visually and aurally balanced, and asks you to unify the disparate characters: how similar are their motives, their integrity and their agency? How closely are they tied to the same emotions? It’s a super exaggerated, melodramatic device and it’s absolutely perfect for this super ridiculous, excessive melodrama.

Crassus’ victory against a single opponent in the comfort of his townhouse costs as much – and the show’s perennial slo-mo blood spatter both emphasizes this physical effort and abstracts the action of slaughter, allowing viewers to bask in the badassery of the fighters – as cutting through a half a Roman century does Spartacus. The two are sides of the same coin in how they move, how they’re covered by the camera, how they overcome obstacles, bellow in triumph, and flex their incredible biceps.

Think about how smart this is for a show who’s tagline this year is “To the bitter end.” We all know that this ends very badly for the people the show is continuing to ask us to care about. This is Game of Thrones‘ RW problem, and you know what that means if you know what that means. I don’t know how I’m going to look at certain characters for the balance of this upcoming season on Thrones. The show will find a way to deal with it, I’m sure, one that probably plunges the sword in deeper. But Spartacus has never taken such perverse glee in executing key cast members, even as every season it kills a great many of them without flinching. So how does the show address its ultimate, Shakespearean problem? 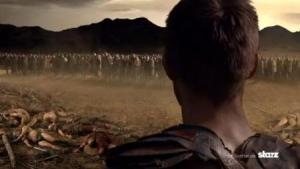 It elevates its antagonist to…if not nobility, at least a transitional place between antihero and villain. In hilarious contrast to the dives’ historical reality in which he had already fought ruthlessly for Sulla in partnership with Metellus Pius, the senator seen in this episode as aligned with the majority of the Senate who envy and fear Crassus in equal measure – Marcus Crassus is being portrayed as The Man Who Knows Slaves. As pompous Roman after arrogant Roman finds their blood upon the sands, Crassus hires a gladiator to learn their ninja ways, then kills him in a death contest to prove to himself he’s ready to completely outthink,  outclass, and outfight the rebel Thracian. You can’t help but be compelled by a character who’s introduced to us, in response to his tutor’s incredulous question of “Are you asking me to kill you?” as saying, “No. I am commanding you to try.”

This gives me great hope for the series going forward, especially as we have yet to meet the young Julius Caesar, who may indeed have actually been present in the Third Servile War and of whom Crassus was a principal patron before he made his name in Gaul. Likely the series will go the Braveheart route, allowing Caesar to absorb the best of both these men and provide the historical change that’s so often demanded of the conclusion of epic stories. I completely share Our Hero’s sentiments towards this new breed of Roman scum and the remaining episodes of this fierce, focused final season: Let Them Come.

This entry was posted in Cable TV, Essays, TV, TV Form And Style, TV Theory and tagged cinematography, editing, i know because of my learnings, premium cable, Spartacus, starz, tv. Bookmark the permalink.

a growing archive of handpicked stills from the best looking movies.

The Road Goes Ever On and On

The Stuff That Films Are Made Of...