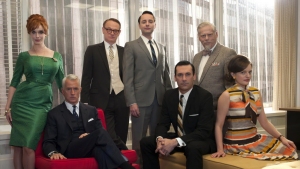 Mad Men is an TV show that goes for the gut in your mind. It’s intellectually pleasurable to digest and discuss, even as it jerks you around like the worst kind of asshole, the one who looks so damn good in a suit you can’t ignore it. Trying to untangle what it means when Don looks hard at a reel of film or a mirror or just out into space is all part of the fun. Let us begin the fun:

Drew Goddard: Guy Walks Into an Advertising Agency (a.k.a. Chekhov’s Lawnmower): I feel that this was the first bullshit-free episode of Mad Men, the first one without scenes that I thought were pointless of weirdly meandering, the first time that I was like, “Wow that script was tight.” (’bout time) While Betty finds new ways to be an appalling creature, I get *all* of the Joan related emotions, and I realize how fiercely attached I’ve gotten to Lane Pryce. Plus, for the last ten minutes I was just laughing in shocked delirium going, “What the hell am I watching.” Mad Men has routinely frustrated me and disappointed me as much as it has impressed me, but the first four fifths of this episode were everything that I hoped the series would be based on the strength of the pilot. And then the last fifth was something completely crazy and unpredictable. And it closed with a Bob Dylan song. Flawless, and the first really great episode of the series.

Lisa Lassek: The experience of watching Mad Men is one that I compare with teaching, or workshoping a piece, or playing mini-golf. Most of the time, the show doesn’t live up to its potential. It falls short, or it’s tedious beyond belief, or it becomes a pretentious cliche of itself. But then something like “Chekhov’s Lawnmower” (which is what I’m calling this episode from now on) happens, and you realize that Lane Pryce talking about Tom Sawyer is worth wading through all of Betty’s bullshit and Don’s staring into space. This is how I approach Mad Men, and the good news is, there’s at least one thing in each upcoming season that’s in the same league as this ep. : )

Jane Espenson: I don’t know, I think its better than that. I’ve found I’m very rarely not intellectually engaged or entertained. But yes, the next season and a half becomes really awesome. Also how dare you insult mini-golf! 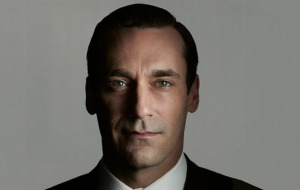 Drew Goddard: I’ve been talking a little bit about this with Lisa lately. After marathoning through the second season I’ve found that I have a very strong love/hate relationship with the show as a whole. I am incredibly engaged with everything that has to do with the office politics and their relationships with the clients and the puzzlebox aspect of “How do we sell this thing?” I am *ocassionally* engaged emotionally by what happens to Don, Peggy, Joan… sometimes Sal… and pretty much no one else. Even when it’s things that I feel I *should* find emotionally engaging, the show’s very distant and cold approach to them often leaves me just going, “So what?’ Am I intellectually engaged? Sometimes, yes, but that mostly comes from the show’s reconstruction of the 1960’s and their social/commercial situation, not from the characters’ actions or journeys. I still find the show oddly compelling in a weirdly masochistic way, but I’d say the episodes that entertain me are a little over half of the total number, while multiple episodes (looking at you “Three Sundays,” “Maidenform,” and “The Inheritance”) gave me practically nothing that I cared about in any way. There’s still a lot of stuff that I admire about the show, but I feel that it comes in spite of its weird rhythms and milieus, not because of them.

… with that said, if said rhythms and milieus are some sort of grand chess-playing masterstroke that is meant to set up a deep and profound contrast once the attitudes and upheavals of the late sixties kick in, I will be ready to give credit then. But, I will have to wait a few more seasons to see if that comes about or not.

Ben Edlund: I stopped watching Mad Men after 3 3/4 seasons. I recognize that it is a very well-crafted show. The writing is quite good; the sets and costumes are exquisite and beautiful; the acting is phenominal all around (well, the important roles anyway). But ultimately, I realized that eveyr time I finished an episode, I had no interest in moving on to the next one. It’s not just the slow pacing itself, I can handle a slow burn. It’s that I with rare exception could not become invested with the characters on an emotional level, which I think is a neccessary component of television as a medium. I like Gabriel’s point about intellectual engagement, but while that can be enough to enjoy a film, the length of a television series and the episode-structure requires something more in order for me to want to watch it. 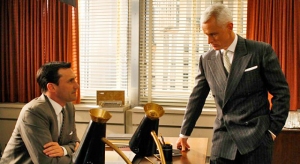 There are two Mad Men episodes where I feel I actually understood why people fawn over MAd Men as reaching ‘great’ television rather than merely good tv: “The Grown-Ups” and “The Suitcase”. But other than those, I am firmly of the opinion that AMC’s other opus, Breaking Bad, is just as if not more visually beautiful and daring while also being infintiely better at crafting characters you deeply care about.

Lisa Lassek: It IS compelling, but in a really odd, sometimes very masochistic way. This is exactly where I’m at. I will say, going to the episode list, many favorites are loaded in 3 and 4 – “The Grown Ups,” “Shut the Door. Have a Seat,” “The Suitcase,” “The Beautiful Girls,” – and there’s a run in 5 that comes as damn close to perfection as anything I’ve ever seen on television (except The Wire, because The Wire is always excepted). My emotional investment, I realize, is in the gradual changing times as much as it’s in any one character’s (and by character I mean Joan, Don, and Peggy) individual arcs or predicaments. It’s in how exponentially tragic Don gets, how Peggy is growing (Wesleyan gender studies could make the argument that the show is ABOUT her), how I relish every step Sally is taking towards the inevitability of her washing up as a hippy in CA. It’s like watching the leaves turn. But I totally get where you’re coming from, Ben, it’s a show that doesn’t want to give you a fucking thing besides the emptiness of the human condition on a weekly basis, and only occasionally rewards your long-term investment in its super serialized narrative structure by running a limey over with a lawnmower.

a growing archive of handpicked stills from the best looking movies.

The Road Goes Ever On and On

The Stuff That Films Are Made Of...